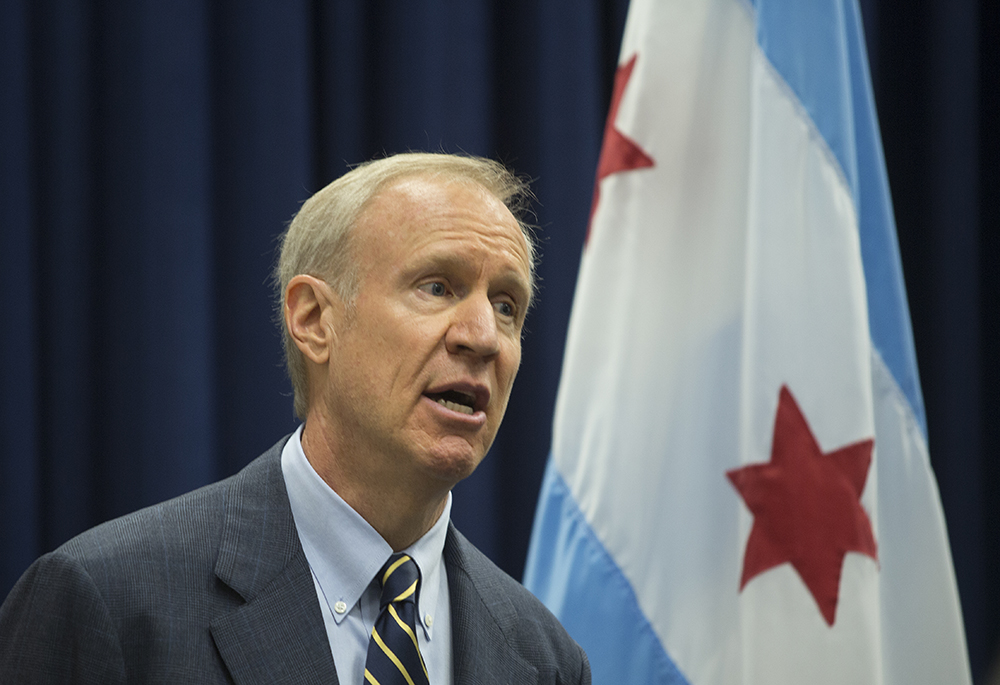 Governor Rauner speaks to City Council members regarding labor unions in Chicago and Illinois on May 6, 2015 during a monthly City Council Meeting.

Governor Rauner’s new TV ad campaign is a declaration of war on the Democratic majority in the legislature — which doesn’t bode well for a timely resolution of the state’s budget stalemate.

The ad itself is more evidence that the dominance of big money in our political system serves to degrade debate; it’s used to obscure rather than clarify issues.  It’s also evidence that Rauner has lost the early skirmishes of the struggle.

The governor went on the road with his “turnaround agenda” — aimed at boosting business profits by reducing workers’ wages and protections — and failed to generate the surge of support such a radical program would require. Instead he inadvertently mobilized union members in towns and cities across the state.

Then the legislature considered his agenda items one by one and voted them down.  In the course of that, one interesting factor emerged: there are plenty of Republican legislators who are not on board with Rauner’s anti-labor crusade. They are a vestige of the days when the GOP was a mainstream party.

(The House did pass a measure that targets workers comp insurance premiums — which would reduce business expenses — but that’s not what Rauner wanted: he wanted a measure that would boost insurance company profits by cutting benefits for injured workers.)

Having failed to win sufficient popular or political support for his agenda, Rauner has taken hostage funding for services for the state’s most needy — the poor, elderly, and disabled. He’ll release the hostage, by agreeing to consider new revenue, only when he gets his way on what House Speaker Michael Madigan accurately characterizes as extreme non-budget items.

That’s a high-risk strategy, since the endgame could involve a state shutdown, and even schools failing to open this fall, if state funding isn’t available.  We should recall candidate Rauner’s statement that he was willing to force a government shutdown to get his way.

The new TV campaign may be an effort to get in front of that, so Rauner isn’t blamed for a situation that, in fact, has never occurred in the state’s history — until he took office.

It’s a slick ad, but it has a basic political deficiency: like Rauner’s campaign last year, its appeal is its vagueness.  It may generate warm feelings for the governor, but it doesn’t build support for his program.

The ad accuses Madigan and the Democrats of opposing “spending discipline” and “job-creating economic reforms” (it throws in term limits because that’s an issue that polls well) and of wanting to raise taxes. It features Rauner promising to stick to his guns; his purpose is described by one single word: “change.”

The catch-phrases sound good on the surface. Spell out what they mean, however, and Rauner would be in trouble.

“Spending discipline” and taxes are related to the budget. But Rauner’s position is disingenuous.  On spending, he complained when $300 million was cut from he 2014 budget, saying more revenue should have been found by sweeping special funds. Then he rescinded a paltry $26 million in “nonessential spending” cuts after his constituents let him know how essential those programs were.

So it’s clear he’s not serious about the $4 billion in cuts he’s proposed for next year’s budget in programs for the poor and vulnerable, along with higher education. These go way beyond “spending discipline.” They are a heavy-handed bargaining position, not a budget proposal.

That’s because Rauner has always acknowledged the need for more revenue. As a candidate he endorsed expanding the sales tax and reducing corporate tax breaks. Now he’s attacking his opponents for positions he himself has taken. That’s classy.

Which brings us to “job-creating economic reforms.” It sounds good — a lot better than union-busting right-to-work zones and cuts in unemployment compensation and benefits for injured workers, which is what it refers to. But Rauner knows that if he spells out what he means, he loses support.

It’s hard to see how this new campaign will play out, says veteran political consultant Don Rose. “He’s not going to besmirch Madigan any more than he has been already,” he said. “I don’t think he’s going to peel any Democratic legislators away from Madigan.”

It’s not a negotiating tactic, he said, “It’s a bullying tactic.”

He adds: “This is just a guy who was elected by spending millions on TV and now he’s regressing to what worked for him in the past.”

If polls show the ads having much impact, Democrats can also take to the TV, and they have plenty of material with which to go after Rauner — particularly the budget cuts he’s proposed.

We seem to be witnessing a knock-down, drag-out fight between two sides, and while neither is pure, both have principled positions.  It’s too bad we can’t have an open debate over the best direction of the state, instead of Machiavellian intrigue.

But if Rauner thought he could win on the merits of his arguments, would he be playing games with the state’s budget — and with the state government’s capacity to serve its residents and educate its children?