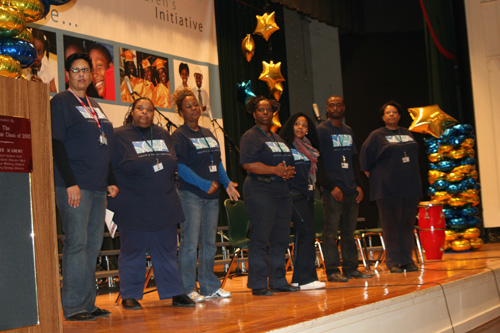 With $2 million raised, a recent kick-off rally and a newly opened
office, a Roseland project modeled after the Harlem Children’s Zone is
out of the starting gate.

With $2 million raised, a recent kick-off rally and a newly opened office, a Roseland project modeled after the Harlem Children’s Zone is out of the starting gate.

SGA Youth & Family Services has opened an office at 10th and Halsted that will be headquarters for the Roseland Children’s Initiative, a project that will coordinate educational and social services for young people in the far South Side community. Twenty staff members are in place at the office, which shares the building with a child care center. “That will be wonderful to recruit more parents,” says Susana Marotta, SGA’s president and CEO.

On Saturday, a rally for the initiative drew several hundred attendees as well as political heavyweight and Harlem Children’s Zone founder Geoffrey Canada.

Plans for the project, which involves partnering with Roseland schools, include:

*“Paraprofessional student advocates,” community members who have attended a 40-hour training program on child development and family dynamics. So far there are four, working at Curtis and Bennett schools. More will be trained soon.

*A program called Bridges that will help students at critical junctures during their schools: when they enter kindergarten, begin the middle grades, and start high school.

*A local version of the Harlem Children’s Zone’s “Baby College,” which offers classes to parents on how best to help their children thrive. It will likely be launched in about a year.

“What is different is that this is long term,” Marotta says. “We are not just going to be here for one year or two and then leave. Each family will have a case manager that will follow them through their lives.”

Also in the works: a partnership with Roseland Prep Academy, a contract school approved at the November 2009 school board meeting. It was originally slated to open in September, but that will be delayed by one or two years because further approval is needed from the alderman, says Ron Migalski, SGA’s vice president of clinical programs. “The specific block that the school is located in is considered pretty high-risk,” Migalski says.

Roseland Prep will be similar to Harlem Children’s Zone’s Promise Academy, Migalski says. “We’ll be able to work hand-in-hand with the teachers in a much more concentrated effort. That allows us to know immediately what’s going on with these kids.”

So far, SGA has raised just $2 million of the $7.5 million it needs to cover the Initiative’s first five years. But even the full amount will be just enough “to have a foot-hold” at the critical stages of children’s education, says Leslie Joseph Inch, SGA’s senior vice president. The ultimate goal is to reach 65 percent of the roughly 14,000 young people in Roseland, enough to bring the neighborhood to a “tipping point” toward improvement.

Grant proposals are currently before some local foundations, Inch says. The $2 million raised so far includes a $1 million gift from a former client, Joseph Pedott, developer of the Chia Pet and the Clapper.

The project will also incorporate state juvenile justice prevention and intervention funding. Organizers plan to apply for the next round of federal Promise Neighborhoods funding (which will include $10 million for planning grant and $20 million for implementation grants.)

Roseland, like several other Chicago communities, missed out on federal dollars when the first round of Promise Neighborhoods grants was announced last fall. However, it was one of about 20 high-scoring applicant neighborhoods around the country that are receiving technical assistance with upcoming grant applications from PolicyLink, a national nonprofit research and advocacy organization. It is the only applicant from Chicago that was invited to participate.

While the Harlem Children’s Zone chose to open charter schools, Roseland’s program will work with existing schools in that neighborhood.

On Saturday, choirs from the district-run turnaround Fenger High School and from Curtis Elementary, a turnaround managed by the Academy for Urban School Leadership, performed at the rally. Fenger Principal Liz Dozier touted her school’s success, noting that 165 students will graduate this year and the school’s freshman on-track rate has increased by 35 percent.

In his speech, Canada noted that in his organization “if the kids don’t get into college, a lot of people don’t keep their jobs.”

He also challenged those in the audience to take a new role in their neighborhood. The first task at hand, Canada said, was to not be afraid of crime and other challenges.

“When 12-year-olds believe they can run you out, grown men, imagine what they’re going to be doing at 15,” he said.

Tackling student safety is critical for creating an environment where students can learn, Canada said, and Harlem Children’s Zone has done it partly through parent patrol groups that keep a lookout during the walk to and from school.  Parent patrols have become popular in CPS as well, though it’s unclear whether the district will continue to allocate money for them.

Canada asked the audience put themselves in the shoes of students: How would they feel if a new co-worker punched out another employee and threatened them with violence?

“Most of us are not going to go in our office and get on our little computer, and go on with business as usual,” he said.

“People say, does that help their test scores? No, but it helps them chew their food. It’s about what decent people do,” Canada said. “They need to grow up thinking the adults are in control, have power and influence, and are there to help them.”