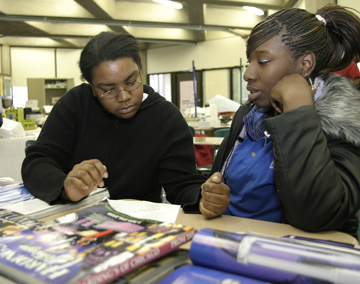 Over his high school career, Ricardo Gilchrist has transformed himself from a “kinda rugged” freshman with a history of bad grades to Junior ROTC battalion commander and salutatorian contender.

A student at the School of Leadership—one of four small schools created at South Shore High after years of other school improvement efforts failed—Gilchrist wound up there by default because he was late applying to Hyde Park High.

That experience woke him up, he says, and he vowed to stop being lazy in high school, a vow he fulfilled. “I have good attendance, honor roll grades. I am really proud of myself,” he says.

Though he was “drafted” into the School of Leadership when South Shore broke into small schools, he’s grown to appreciate its JROTC program. “It really helps you self-motivate,” he observes. “You get awards. Everything you do doesn’t go unnoticed.”

Despite his improved school performance, it took nagging from his English teacher, Theresa Walker, to get him thinking about college. “I was just thinking paycheck to paycheck,” he recalls. Thanks to her prodding, he decided “maybe college wouldn’t be a bad idea.” When he received word Northern Illinois University was interested in him, his mother “was screaming and crying tears of joy.”

But he’ll need to raise his ACT score from a 14 to an 18 to get in. At press time, he was awaiting his retake results.

Gilchrist’s story, like that of the new South Shore small schools, shows promise but also points out challenges yet to be met. Though students and teachers appreciate the more personal environment and credit it with improving learning, school climate and academic achievement still have a long way yet to go. Plus, principals fear close relationships between teachers and students will be jeopardized if the School Board strays from the original enrollment caps of 125 students per grade.

Small schools that opened under the Chicago High School Redesign Initiative have made small strides in improving attendance and student grades, according to an article published this month in the Journal of Improving Schools. South Shore High’s new small schools are in line with a number of the key findings, according to researcher Susan Sporte of the Consortium on Chicago School Research, who co-authored the paper.

The researchers looked at data from the 2002-2003 school year and found freshmen in the initiative’s small schools were absent fewer days and more likely to be on track to graduate on time by the end of their first year. That year, only two autonomous small schools were up and running at South Shore: School of the Arts and School of Entrepreneurship. Since then, two others have opened—School of Technology and School of Leadership.

Small school students’ test scores remain low, and are comparable to those of similar students in other CPS high schools. “The school does take some blame for that,” notes Gilchrist. This year, the School of Leadership has hired Cambridge Educational Services to provide test preparation to juniors before they take the Prairie State exam, which includes the ACT.

Gilchrist says his school could challenge its students more. “They just need more to do. They need something to be motivated.”

Staff at South Shore say school climate has worsened somewhat this year, and some attribute the decline to enrolling more students than anticipated. The original plan for South Shore and its fellow converting high schools, Bowen and Orr, was to cap enrollment in each grade at 125, for a total of 500 in grades 9 through 12 at each school once the transition was complete.

That’s not how it’s working out in practice, say principals, who complain that students who transfer in mid-year are dumped into whichever school has space. “We are still taking in students. I had a call from the regional office today,” complained School of Leadership Principal James Patrick.

“Supposedly, we’re going to have a cap of 500 students with no more than 150 in any grade level,” says Principal Bill Gerstein of the School of Entrepreneurship.

“I wanted them to explain the math to me, “says Patrick, noting that four grades of 150 students adds up to 600 students.

CPS is preparing to set a policy on the issue in the near future, says Jeanne Nowaczewski, director of the office of small schools for CPS, who declined further comment.

Observers credit South Shore with making strides despite the challenges. “It’s a significant improvement over the previous high school,” says Pamela Clarke, director of Leadership for Quality Education, which has partnered with South Shore through the conversion process. “They’re still struggling to attract a more diverse mix of students academically.”