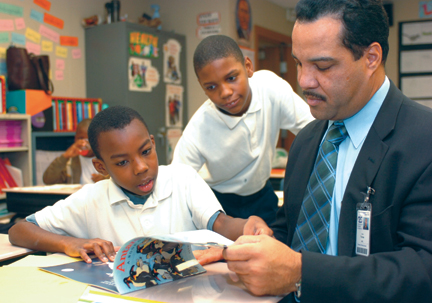 Seven months on the job, and Area 14 Instructional Officer Jose Torres has quite a task ahead of him. Until last year, most of the 26 schools he oversees had shown little or no progress for more than a decade.

Torres—who, as a fellow with the prestigious Broad Superintendents Academy, was mentored by Thomas Payzant, a noted innovator who led Boston Public Schools for more than a dozen years—says he is up to the challenge. His own early struggles with learning English and changing schools frequently taught him lifelong lessons in hard work and discipline.

Raised in Puerto Rico, Torres, 46, had attended six different schools by the time he reached 4th grade. By 5th grade, he was enrolled in a public school in New York, where his family had moved temporarily.

“I don’t remember much about 5th grade except that my teacher ever so often would say, ‘I am your friend, your amigo,'” he says.

A year later, Torres and his family were back in Puerto Rico and he was enrolled in an American military school there, where he was immersed in English. “In 7th grade, I understood what was going on and by 12th grade, my English was OK,” he recalls.

College was a family expectation. “Everybody was going to college and my mom wanted us to be somebody,” he says.

Torres earned three degrees—including a master’s in education and a doctorate in educational administration—from the University of Maryland. He was an administrator for Anne Arundel County Public Schools in Maryland, and later, superintendent of San Ysidro School District in San Diego County, a job that lasted only seven months.

“There was a lot of tension with the board and they accepted me at first,” he says. “Then seven weeks later, they were going to fire me. I survived that, but then seven months later they did.”

Torres, the first person from outside the district hired to run an instructional area, talks to Associate Editor Debra Williams about his latest undertaking.

You are new to Chicago. How did you get to know your area?

I arrived here in April. A great idea was to bring me in early to get to know the city, to shadow Domingo Trujillo [retired chief instructional officer] and different AIOs—some who were leaving and some who are still here—and to get to know CPS.

In July, I met with every principal at their school. I said, ‘You’ve heard my story, tell me your story and tell me your school story.’ Then we had a retreat for principals.

Did you meet with teachers?

I said to principals, ‘We would like to have everyone together and we have to find a place.’ We found [a church]. We invited teachers. I wanted schools to bring cafeteria workers, support staff and parents. We invited some community members. I wanted everyone. It was packed.

What are your goals for Area 14?

We scoped out four goals with objectives. It’s a five-year plan. The first goal is accelerating academic achievement. We want to have 80 percent of our kids meeting or exceeding in the tested areas by 2011, and we want 40 percent of our kids to take Algebra I. We’re far from that.

The second goal is investing in human capital. We want to retain 100 percent of the teachers who we select and, people kind of laugh at this a bit, but we want 40 percent of our teachers with National Board certification.

That’s a huge goal, but if I only make 10 percent, we can make progress. We only have six teachers in Area 14 who are nationally certified. So if we get 15, we will have tripled the number. Yesterday, I heard that 33 teachers signed up to go through the [certification] process.

What are the other two goals?

The third goal is around improving safety and security. We want student surveys [to show that] 95 percent of our kids feel safe in our schools and that parents say kids are safe. The last goal is promoting parents [and] community involvement.

You have quite a challenge ahead of you.

It’s a challenge going into any school district because you don’t know, like we say, where all the bones are buried. But I’ve been in many school districts so I have an idea about how to go about the work. It comes down to a couple of things: raising expectations and improving the quality of teaching.