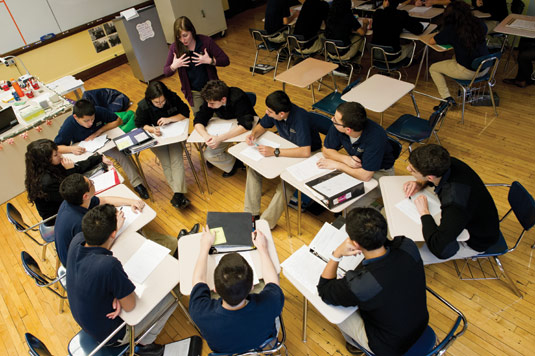 Erin Leuschel, an Advanced Placement language and composition teacher at Rickover Naval Academy, guides a team of students as they prepare for a debate about fairness in the legal system. [Photo by Marc Monaghan]

Selective schools and military high schools (which also have selective admissions criteria) have some of the highest pass rates for students of color on Advanced Placement tests. One of those schools is Rickover Naval Academy, housed in the Senn High campus in Edgewater.

In spring 2011, 52 percent of the Latino students at Rickover who took AP classes passed at least one test. In spring 2012, the rate fell to just 35 percent for Latinos, but half the school’s 12 African-American AP students passed an AP exam.

Principal Michael Biela says he tries to make sure teachers get adequate training to teach at the level of difficulty required for AP courses.

AP teachers nationwide must submit their syllabi to the College Board, and Biela monitors to ensure that his teachers follow it. Review sessions outside of class are intensive—up to an extra two to three hours every week—and have been a major factor in raising pass rates.

“Refining essay writing—that is the big one,” Biela says. Every week, students write an essay or portion of an essay, or do analysis in preparation for writing.

“All right, my little minions of rhetoric, today is Part Two of our jigsaw ‘On Racist Speech,’” announces Erin Leuschel as her students file into class. Leuschel teaches AP English language and composition, a course that focuses on the type of analytical and persuasive writing that students will need to do in college.

Today, students are dissecting the article “On Racist Speech,” by legal scholar Charles R. Lawrence III, which examines the debate over censorship of hate speech.

Leuschel reviews yesterday’s lesson. “Remember, our first paragraph we read was a concession,” she says. “He doesn’t even present his own opinion before giving in to the opposition. Why?”

“Because he would look like a hypocrite,” a student replies—wanting to block racist speech but supporting the First Amendment in other cases.

Leuschel then has students break into teams, with each team assigned a paragraph. The task: Paraphrase, summarize, and discuss Lawrence’s rhetorical techniques, and look for any weaknesses in the author’s reasoning or assertions.

One student, Brayan Raya Jr., quickly speaks up. “The way he defines and categorizes hate speech as an assault weapon. He says we have removed the First Amendment, and helped people in the process.”
Before long, it’s time for the groups to share their analyses.

One student criticizes Lawrence’s definition of the First Amendment. “In his definition, [the goal is] to foster the greatest amount of speech.”

Leuschel paraphrases the writer’s argument. “This is the purpose of the First Amendment, and racist speech disserves this purpose. It doesn’t create more speech, it actually creates less.”

The student then reads the section he is referring to. “The invective is experienced as a blow, not as an idea that is proffered. Once the blow is struck, it is unlikely a dialogue will follow.”

Leuschel points out a flaw in the argument. “I think he almost demeans racial groups, [saying that] if someone attacks them with assaultive speech, they can’t fight back or will choose not to because they know they can’t win.”

History has shown that’s not always the case, she adds.

Later, Leuschel asks the class to think of other examples of speech that might be damaging. A boy mentions bullying and Leuschel mentions the Columbine High School shooting. Then she poses another question for the class. “So now that’s proven—bullying speech causes real harm. Does that mean we should regulate it?”

On another day, Leuschel’s class dissects a New York Times column by Times journalist John Tierney, in which he compares immigrants from Mexico to his own Irish immigrant grandfather. Leuschel prods the class to figure out what purpose that comparison serves.

A student notes that it wasn’t always like that. “When the Irish started coming here, there was this big fuss,” she explains, but people no longer see it as a problem.

“It makes them not threatening,” Leuschel adds. “By paralleling that with Angel Espinoza, it makes us think—maybe we shouldn’t be threatened by this person coming in and wanting to be a citizen.”