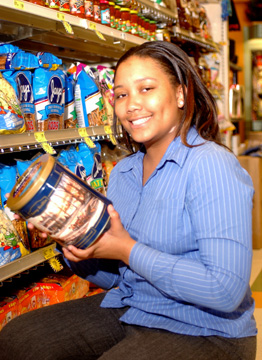 When Brittani Gray arrived at the Chicago High School for Agricultural Sciences her freshman year, she became a fixture in the disciplinarian’s office. The slightest incident set her off and she would blow up. She didn’t think much of school and failed three classes.

“Brittani was in my office a lot,” recalls Assistant Principal Martha Hamilton, formerly in charge of the school’s disciplinary office. “She could have avoided a lot of stuff, but she’d open her mouth, and that was that.”

But this year Gray is a senior who has made an amazing transformation. For the last three years, she has learned what it takes to start a business, and that experience has taught her how to temper her behavior and set goals and achieve them. In the process, she has discovered that school is an important stepping-stone to her future.

“She’s like night and day,” says Hamilton. “Now she’s saying, ‘I’m ready to go to college and I don’t want to mess up my record.'”

“I’ve gone from the bottom of the barrel to being on the honor roll this year,” says Gray. “I can’t believe it myself. I no longer see school as a chore; it’s my ladder to my future.”

Much of Gray’s conversion comes from being part of Educated Eats, an entrepreneurial program for high school students at Chicago Ag that teaches business and entrepreneurial skills in a unique way. Students develop a natural food product and get it manufactured and on grocery shelves.

At the same time, students who participate gain confidence that allows them to change inappropriate behavior, boost grades and become leaders. They also see practical ways to use the writing and math skills they learn in traditional coursework. The program also encourages students to aim for college as proceeds from the product sales will fund scholarships.

“When you provide kids with these kinds of experiences, it changes the way they think of themselves, . . . the capacity for what they can do,” says Sunny Fischer, executive director of the Richard H. Driehaus Foundation, which helps fund the program.

“The essence of the program is entrepreneurial,” says Rona Heifetz, founder and executive director of Educated Eats. “But I think youth development is the most important part of the program. There have been lots of opportunities to teach important soft skills—how to interact with people who are not your social peers, how to communicate and tap into resources that will benefit you. These are skills the kids will take away with them and have forever.”

Seventeen students participate in the program, which began during the 1999-2000 school year when they were freshmen. It is modeled after a similar student-created program in South Central Los Angeles called Food from the Hood, which sells salad dressings to major supermarket chains nationwide, including Whole Foods stores in Chicago.

Heifetz says she chose to replicate the program at Chicago Ag because the high school’s unique combination of a traditional core curriculum with a focus on agriculture, finance and food science was a natural match. Also, the school’s former principal, Barbara Valerious, was receptive to the idea.

Local funders, including the Driehaus Foundation, Chicago Board of Trade and Illinois Department of Commerce and Community Affairs, put up $100,000 to pay for annual expenses such as business insurance, field trips and start-up costs.

The students plan to have their product, a ready-to-eat natural caramel and cheese popcorn, on the shelves of Jewel Food stores this winter. Holiday popcorn tins are already available.

When she started in the program, Gray says she thought the process of making and marketing a product would be quick and easy. “That first year, we thought we’d get a product, get it on the shelf and get money,” she notes.

But Gray and the rest of her classmates discovered that developing a business is a time-consuming, detailed process. In the first year, the students started at the bottom by learning basic business skills, exploring the grocery and food industry and trying to understand what it means to run and control a business.

“We talked to people from Jays [Potato Chip Co.] and others in the food industry, we went to trade shows, food shows and snack expos,” Gray recalls. “It was a little intimidating at first, but we soon learned the food and business language.”

The students also developed team-building skills by creating five divisions with responsibility for manufacturing and pricing, marketing and publicity, distribution, finance and operations, and graphic design and packaging.

The opportunity taught Gray valuable lessons about how to work with others.

“I’ve never been good working with other people,” she explains. “I really didn’t want to hear other people’s opinions if they were not like mine. I ended up getting into a huge argument because someone’s idea was different.”

Gray eventually realized that an idea she opposed was similar to her own, only better. “That’s when I really started to listen to what other people had to say and respect other people’s opinion,” she says.

Since then, Gray has worked on each business team after she suggested the groups rotate responsibilities so that each student would be able to perform each task.

During their sophomore year, Gray and her peers conducted market research to identify potential snack food products and competitors. Initially, the students looked at salsa, hot sauce, smoothies, tortilla chips, popcorn and other products they believed fit their youthful image.

By her junior year, Gray and the group had selected popcorn because it was easy to produce and has a longer shelf life. They wrote a business plan and began looking for a food manufacturing company to make the popcorn. They also tended to other financial, distribution and marketing details.

“We put in a lot of work,” says Gray. “We didn’t know a business plan went into a business. We revised our plan 10 times, from tiny misspelled words to a total revision, and we’re still not done. We plan to have it finalized soon.”

Now in her last year at Chicago Ag, Gray is working with her classmates on the final push to get their popcorn on supermarket shelves. Last month, the group designed packaging, determined popcorn bag sizes and set a launch date. They are also working on a name for the popcorn product. In addition, they delivered “sell sheets” or purchase orders for holiday popcorn tins to grocers, funders, friends and other potential customers.

Doing the hard work to create and deliver a new food product has made Gray rethink choices she’d made in her personal life.

“I wasn’t putting anything into class, and I was getting nothing back,” she says. “Working in a team made me realize that my actions weren’t just affecting me, they were affecting others, mainly my family.”

Indeed, this year Gray is taking an honors English class. “I didn’t have the best GPA, but I asked my teachers to stay on me and keep me on track,” she says. “Getting into that class was one of my goals and I made it.”

Gray says college has been her ambition all along, but Educated Eats exposed her to new career options.

“I wanted to be a nurse all my life because I have been raised around nurses,” she explains. “But I also like marketing and business after being exposed to the program. Before, I’d never thought of business as a career.”

Gray found a college where she could pursue both: Grand Valley State University in Allendale, Mich., offers a bachelor’s degree in business and nursing. “I have a C average,” Gray says. “The school is considering me because my counselor talked to them.”

This spring, Chicago Ag’s young entrepreneurs will recruit and train next year’s new crop of students to take over the popcorn business. The successors may even launch a new product. Gray says it’s an easy sell.

“Even if we never make a dime, we leave with so much more,” Gray says. “I want to own my own business someday and now I know that I can.”