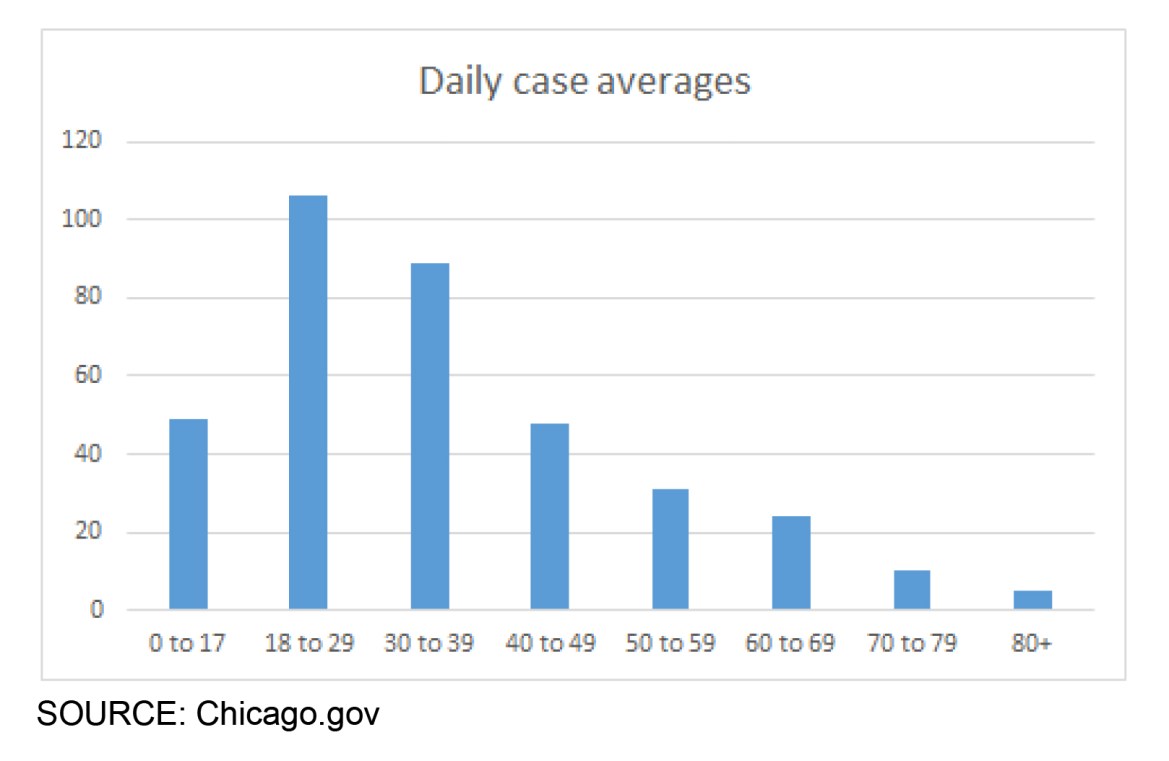 Chris, a 23-year-old Auburn Gresham resident, said it’s because many people around his age are less likely to take precautions against the virus than older adults. That includes wearing masks and avoiding large gatherings at bars and music festivals.

“We go outside. Our generation is trying to live in the moment,” said Chris, who didn’t want to give his last name. For him, that means going downtown on weekends and socializing over drinks and music at bars often packed with maskless faces. It doesn’t bother him, he said, because he’s gotten COVID-19 before and it wasn’t severe.

He does take some precautions though, he said. He wears a mask in public and he stands six feet away from others when he’s waiting in line at grocery stores or restaurants. However, he is skeptical about getting vaccinated, which Chicago Department  of Public Health officials say is the best protection against the virus. And he’s not alone.

According to the U.S. Centers for Disease Control and Prevention, young adults are seeking  vaccines at slower rates than older adults. In Chicago, nearly 60% of 18 to 29 year olds received at least one dose of the vaccine as of August  8. About 53% are fully vaccinated. The only other age group with lower percentages are 12 to 17 year olds. About 52% of that age group received at least one dose and 41% are fully vaccinated.

A 21-year-old certified nurse assistant (CNA) who works at Advocate Trinity Hospital in Calumet Heights said some people around her age took the arrival of the delta variant and increases in cases in the city as a sign that COVID-19 vaccines don’t work.

“They’re like ‘Oh the COVID shot doesn’t work, so why does it matter,” said the CNA, who agreed to speak on the condition of anonymity.

Chris is concerned about how the vaccines could affect his body in the long run. He also points to questions that still remain such as how long they protect individuals and the fact that some people can still get sick after being vaccinated. Dr. Allison Arwady, Chicago’s public health commissioner, said in early August that 99.9% of vaccinated people have not gotten the virus after being vaccinated. Nonetheless, the only way Chris will get vaccinated would be years from now after seeing those who’ve taken them alive and well, he said.

Jahmari Jackson, a 17-year-old Austin resident, said he used to have similar concerns.

I really didn’t understand what the vaccines would do to my body,” Jackson said. He changed his mind after seeing friends and family members, young and old, becoming severely ill with the virus. “You don’t know what day you could get it,” he added.

For 17-year-old Derrick Anderson of North Lawndale, he initially had questions about what the vaccine was made of. But eventually it was simple: he didn’t want to get COVID-19, so he got vaccinated.

“I didn’t want to be infected, so I felt like I did the right thing,” he said.

Aubrielle Tuccio-Wheatly, a 26-year-old Brainerd resident, got vaccinated out of an obligation to her family.

She’s always around her grandmother and two children, one of which is disabled. According to Arwady, young adults are less likely to get severely ill from COVID-19 but are susceptible to spreading the virus to vulnerable populations like older adults and those with underlying conditions.“Sometimes you have to think about the people around you,” Tuccio-Wheatly said.

A 21-year-old from Auburn Gresham, Alecia Stephens, said many who aren’t taking precautions against COVID-19 are influenced by misinformation on social media.“You can put whatever you want on the internet without having proof and some people will take that and run with it,” she said.

Misinformation plays a role in how young people view the virus and their trust in information worldwide, said Thomas Damon Brauch, the chief data officer at Wunderman Thompson. Wunderman Thompson collaborated with the World Health Organization and the University of Melbourne in Australia to conduct a global study focused on Millennials and Gen Z in 24 countries, including the U.S.

The study found that awareness of false news online is high. However, apathy to do anything about it is also high. More than 13,000 of the 23,500 Gen Z and Millennials surveyed were “very aware” of “fake news” surrounding COVID-19 but about about 4,800 of them ignored it.

The finding “is linked to people saying they feel overwhelmed by the amount of information they are receiving,” Brauch wrote in an email. “And with virus variants and slow rates of vaccination, the COVID remains a threat and one that is becoming greater to young people,” he noted.