As parents lined up outside Hyde Park Career Academy for a special end-of-semester report card pickup day in February, four students flanked the front door, handing out fliers color-coded for each grade level.

Senior Aaron Jackson later estimated that over 300 parents received the fliers, with letters outlining the school’s expectation for attendance, dress, grades and behavior. “We wrote the letters ourselves,” says Jackson, who heads a new student group formed last December in the wake of an assault on a popular teacher.

In addition to explaining school expectations, the letter to parents of juniors—who will take the all-important Prairie State and ACT tests—encouraged juniors to take advantage of tutoring to ensure high scores. The letter to parents of freshmen took a hard stand on discipline, asking parents to work with their children to stop “all the negative distractions such as disrespectful students, students not following simple rules and not wear [sic] uniforms.”

The student group—as yet unnamed—is the latest sign of efforts to turn around troubled Hyde Park, where parents, teachers and even students say problems with discipline have been aggravated by the arrival of displaced students. Since 2004, Hyde Park has taken in hundreds of students who would have attended Calumet or Englewood high schools. The school’s problems have been the subject of heated discussion at local community policing meetings. Principal Stacy McJunkins and retired former principal Weldon Beverly recently teamed up to ask for help at a breakfast for Woodlawn pastors held at the Apostolic Church of God.

“We’re not equipped to hold as many students as we have,” says Darlette Willis, parent representative on the local school council.

Jackson and other members of the student group say they want to develop new approaches and offer peer support to improve the school’s climate.

“We believe a lot of times students who have bad behavior are just not encouraged,” he says. “We want to come to the point where we can work one-on-one with students.”

“This is a new administration and a new LSC,” observes Mary Smith, a Woodlawn resident and Hyde Park parent. “I think we may be about to turn a corner, but it will take time.” (The school held a special election in September to fill LSC vacancies.)

Hyde Park, like many neighborhood high schools, is on academic probation and was struggling with other problems, such as low attendance and class-cutting, even before the influx of new students. Stable leadership was also a concern: The retirement of longtime principal Beverly in 2002 led to a revolving-door of three principals in four years.

Sending a message to peers

Discipline problems escalated last fall when the size of the freshman class doubled to more than 700 because of new, displaced students. Class sizes increased, the halls became more hectic between periods, tardiness was commonplace and dismissal time became so chaotic that up to four police cars were stationed outside the school in the afternoons. Tensions escalated between police and students, and parents at one community policing meeting complained that officers were harassing students. (The local police district plans to offer a workshop for students on how to interact with police.)

But the assault on science teacher Matthew Knoepke was the last straw for some students.

Knoepke went into the hallway during his prep period to talk to students loitering outside his classroom. “I tried to wrangle them up and send them to class,” he recalls. “A student hit me in the face.” The young man was later expelled.

“Everybody was really angry and frustrated about what happened,” says Jackson, who is in Knoepke’s Advanced Placement biology class. Jackson called a meeting of students, and about 60 showed up.

A week after the letter campaign, 15 of the students met after school in Knoepke’s class to discuss their next steps. After a long discussion of the dress code and the lack of consequences for students who don’t follow it, the group took a quick poll and realized that many of them weren’t following the code themselves. To set an example, they agreed that no student out of uniform would be permitted to attend the next meeting and stay in the group.

“Where this group will find success is in making inroads with their peers,” observes Knoepke. “You’re much more receptive to the message from someone you know well.”

During the February meeting, Jackson proposed that members ask for time during grade-level assemblies to talk with students about discipline, attendance and academics. “What would we say to freshmen?” he asks.

The meeting yields one suggestion: Require students to meet the dress code in order to participate in athletics. Several students made the proposal to the LSC in February; it is still being considered.

Violence on the decline

In November, McJunkins brought in Thomas Trotter, formerly dean of discipline at Fenger High in Roseland, as an assistant principal. Teachers say school climate has slowly begun to improve since he arrived, and violence such as fighting and assaults are on the decline.

“We sent out teams of off-duty officers, and [on-duty police] were right there where needed,” says Andres Durbak, chief of safety and security for the district. “Our climate team, which we deploy to handle big problems in schools, spent much less time at Hyde Park than they did last year.”

Reining in discipline problems such as cutting and tardiness can also make a big difference in improving a school’s climate. McJunkins acknowledges that discipline remains “a work in progress. We have some bad habits to break.”

One tactic other high schools have used to restore order is a closed-campus lunch period.

“I’ve asked several times, ‘Why can’t we close this campus?’ says junior adviser and English teacher Patricia Malopsy. “The explanation I was given was, ‘We physically cannot house the students.’ “

Trotter acknowledges that a closed campus could help, but says, “Our biggest problem is, how do we house them in the lunchroom? We’d have to have two start times.”

Dress code enforcement is another concern. While Hyde Park has yet to tackle the problem, other schools have solved it.

W. Pearl Bradley, attendance coordinator at Manley High in East Garfield Park, says enforcement takes a concerted effort. Bradley says she calls parents to explain the importance of the policy. “Not being nasty—being nice, but explaining to them that this is for their child’s safety,” she says. (Dress codes keep students from wearing gang attire and allow staff to identify students and non-students at a glance, making it easy to notice strangers if they slip into the building.)

Trotter favors the proposal to ban dress-code violators from sports, and says the school needs “a point person” to handle enforcement.

Last June, two seniors were the first Hyde Park students to earn diplomas from the prestigious International Baccalaureate program. While the IB program is a lure for high-achieving students, parents and teachers say the school needs stronger academics for all students.

“Hyde Park should be more challenging,” says Hafitha Dawoudi, whose son is a junior in the honors program. At nearby Bret Harte Elementary, her son had A’s and B’s and was in an accelerated math program. Now, she says, “all the stuff he’s doing, he did in 6th, 7th, 8th grade. He’s saying he wants to leave.”

Teachers say the school needs to go beyond the current emphasis on test preparation for juniors and find ways to bring freshmen and sophomores up to speed academically. Better instructional leadership is key, they point out.

“I think that’s what teachers have been starving for, for years,” says Malopsy.

English teacher Maria Chavez, the first Hyde Park teacher to earn certification from the National Board for Professional Teaching Standards, has already turned in her resignation and predicts more colleagues will do the same. “They’re going to lose a lot of teachers this year,” she says, citing poor communication between faculty and administration and a lack of support for teachers.

Malopsy, a veteran who formerly served as a Chicago Teachers Union delegate for Hyde Park, says “time’s about up” for the new administration to make progress.

“The only thing that’s consistent from year to year is that our kids need help and they’re not getting it,” she says. “They’ve got to start showing some kind of improvement, something that’s different, some kind of change.” 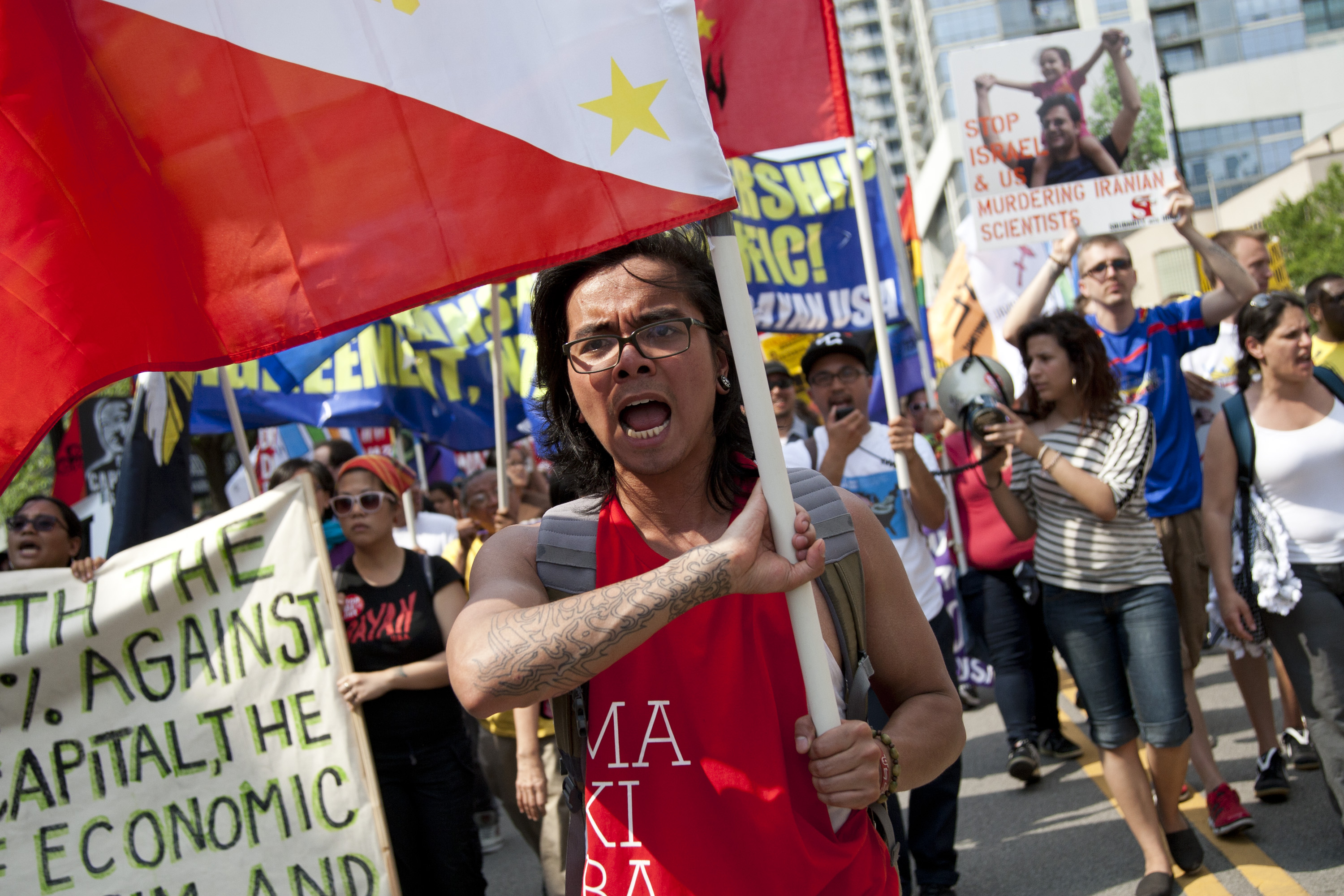 NATO protesters march down Michigan Avenue in Chicago, May 20, 2012. Photo by Brent Lewis.