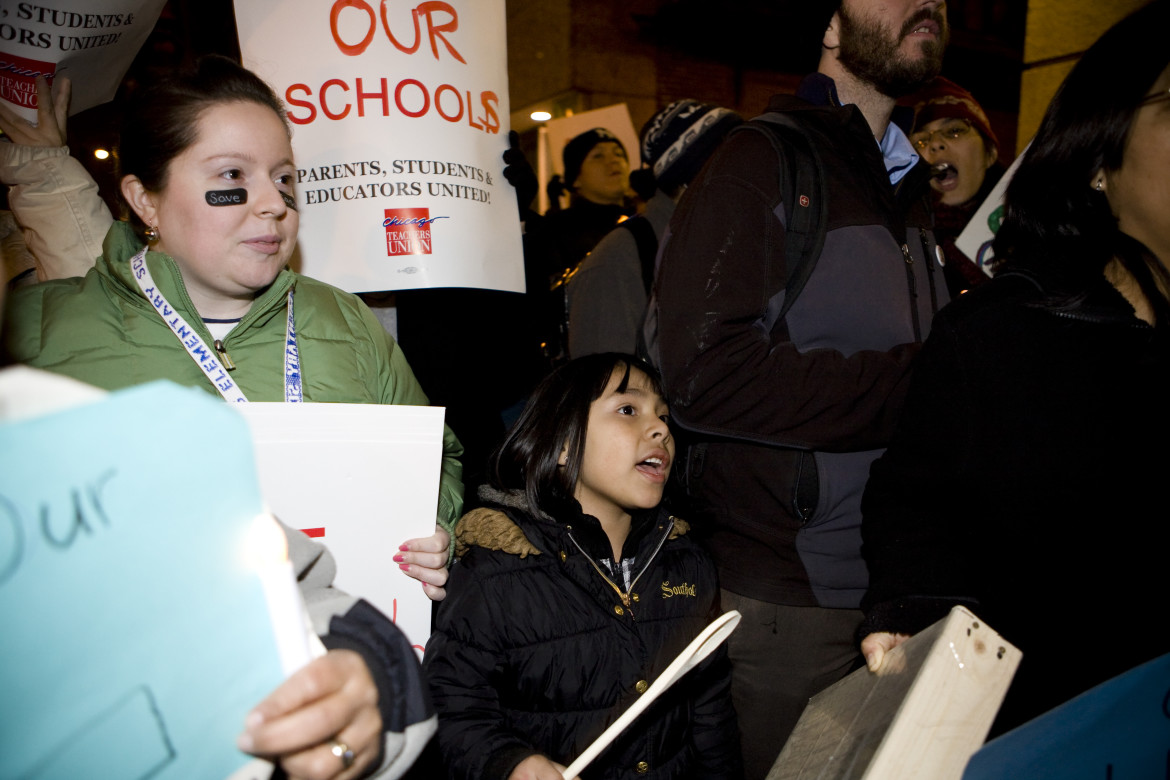 The night before a School Board meeting that was disrupted by protesters, parents, children and community activists held a candlelight vigil against school closings, turnarounds and a plan to open more charters. Photo by Cristina Rutter.

Just as CEO Jean-Claude Brizard took to the podium to start a presentation at the December School Board meeting, in a booming voice, activist Adourthus McDowell tore into the proposed closure and turnaround of 14 schools, ending with the chant of “those are our children, not corporate products.”

Once it died down, Board President David Vitale turned his attention to Brizard, saying “let’s hope they have gotten it out of their system.”

But before Brizard could introduce his PowerPoint, another woman stood up and launched into the same statement with the crowd repeating each sentence in unison. She was escorted out of the board chambers. But, like a whack-a-mole arcade game in which one mole gets hit on the head and one pops up, another protester, statement in hand, stood up and led a chorus.

Amid the ruckus, board members approved a motion to go into closed session, quietly stood up and walked out of the room. It would be more than two hours before their return.

In their absence, Chicago Teachers Union leaders held a mock public comment session, creating a surreal atmosphere in which parents and teachers stood behind a podium and talked to empty leather chairs.

Ever since CPS began its policy of closing and turning around schools, the actions have caused a fair amount of rancor and some protest. But Wednesday’s board meeting was the first time that protesters effectively shut down a meeting.

When board members came back, they listened to some public testimony and then held a quick business meeting. At the meeting, they approved 12 new charter schools.

The December board meeting was the first one since CPS leaders announced their proposals to close two schools and phase out two others. In addition, they want to turn around 10 schools, a process that entails replacing most of the staff and administration of a school.

McDowell is aligned with the Kenwood-Oakland Community Organization. KOCO has traditionally opposed such actions, but this year is even more entrenched as one of their education organizers, Jitu Brown, serves on the LSC at Dyett High in Washington Park, which is slated to be phased out.

Like many speakers, Brown made his case three times Wednesday. First, he spoke at a press conference in the lobby of the central administration building. Then, he spoke during the CTU public comment session in the absence of board members. And once again he spoke when board members returned.

Getting support from Occupy, relying on research

While many in attendance were parents and teachers of targeted schools, the protest is gaining steam from Occupy Chicago, part of a national movement with a broad agenda, mostly against the concentration of wealth, that has drawn support from a number of unions. Ashley Bohrer, who is part of the Occupy movement, says her organization and those protesting against school actions have similar goals: They both oppose corporate takeover or privatization of public entities, a charge critics make against charter schools.

Also, the activists are bolstered by a growing body of research that calls into question whether the policy of closing schools and turning around other ones has sparked any overall, dramatic improvement in the school system. In their statement, the protesters noted that research from the University of Chicago and Stanford University has concluded that the policy has not led to academic gains.

They also quoted an analysis done by Chicago Public Media and Catalyst Chicago that showed that about a fifth of schools replaced or turned around over the past decade are high-performing, but that about 40 percent are Performance Level 3, the lowest rating given by CPS. Performance Level 3 schools are eligible for closing, according to CPS criteria.

Besides Vitale looking annoyed and Brizard looking tired, board members and leaders said little when the meeting finally reconvened at about 1:25 p.m.

Though many had left, one group of parents and teachers from the Belmont-Craigin neighborhood stayed. Northwest Middle School parent Julio Clinton told the board that they had gathered 700 signatures opposing Christopher House Charter School, which is to be built on the same campus as Northwest Middle School.

“We lost six teachers this year and now you are giving money to build a charter school 16 inches from our school,” he said.

“Students deserve some educational choice,” said Lori Baas, CEO of Christopher House, a 100-plus-year-old social service organization. Baas notes that the organization has brought out supporters to various public meetings on the charter.

By the time it came to this meeting, Christopher House and the other charters seemed to be a done deal. When the charter school supporters came up to speak, board members were complimentary, thanking them for their hard work. Board member Mahalia Hines said she has visited Noble Street Charter School numerous times and liked what she saw.

During the business section of the meeting, board members approved the charter schools through a motion by Vitale to apply the last unanimous vote. That means that the items are approved without discussion or a roll call.

Brizard also never got to give his presentation on how he plans to dole out capital improvement money. In addition to $391 million of CPS funds already approved to spend on capital improvements, the district is seeking $269 million in external funding, most of it from the city.